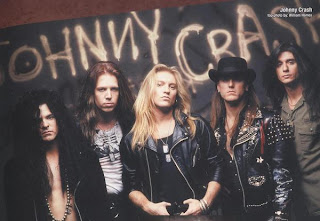 It's nice to hear a band for a change that doesn't imitate Iron Maiden or Led Zeppelin.

Imitation isn't bad ... except when everyone chooses the same band.

Vicki James Wright sings like he's the son of Scott albeit with a few more Steven Tyler-esque screams.

The music is raw AC/DC but much more metal a la Los Angeles glam than bluesy.

Though, It's surprising how there really is a L.A. rock sound that comes through the music .

These guys are really great & have put together an incredibly solid album that rocks hard without going overboard or too much into glam.  "Hey Kid" was the MTV track chart-topper starts the album & let's it take off to higher places "No Bones About It", "Thrill Of The King" & "Axe To The Wax" are great songs. Some people remember Johnny Crash because following this album Dizzy Reed, on guitar instead of keyboards & drummer Matt Sorum joined the ranks before the band crashed & the two joined Guns N Roses.

All records come in a clear plastic sleeve + Quality checked before sending !!