Oh, those crazy days of slasher films, when every summer camp became a potential slaughterhouse. The Burning was one of the flood of movies that followed the success of Friday the 13th, and it's more notable today for an unexpected roster of talent than for its success as a horror movie. You will note that the opening titles feature the unusual credit of "Created and Produced by Harvey Weinstein," and sure enough, this is the first feature film bearing the name of the future Hollywood mogul. Let's acknowledge that Weinstein's instincts were shrewd, since this junky thing fit right into the kill-the-teenagers trend after Friday the 13th, and thus a safe way to get a return on investment. We're at Camp Blackstone, where a disfigured loony, still sizzling after getting burned by unhappy campers years earlier, exacts his revenge on the empty-headed current crop. Among the campers are future Seinfeld star Jason Alexander, Fisher Stevens, and (in a smaller part) Holly Hunter. There's a vintage early-'80s synthesizer score by Rick Wakeman, but the real star of the movie is effects whiz Tom Savini (Dawn of the Dead), who does his bloody best with the murders. We don't care much about the teenagers, but students of gore will savor the throat-cuttings and the finger-loppings. --Robert Horton 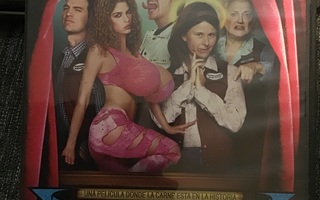